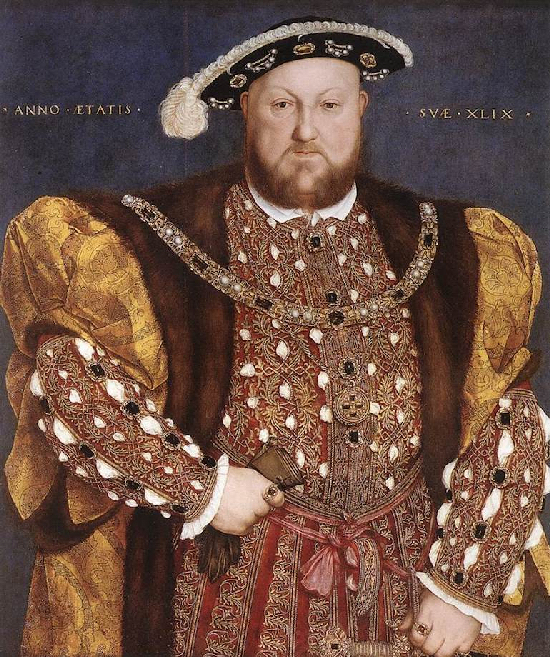 Henry VIII had been unable to persuade the Pope to annul his marriage to Catherine of Aragon. Desperate to marry Anne Boleyn, Henry VIII agreed to make himself Head of the Church in England and break all ties with Rome.

See also: Why did Henry VIII made the Break with Rome?.

This article looks firstly at the Reformation in Europe and then the English Reformation including the steps taken to make the Break with Rome. The Reformation in Europe began when a German monk named Martin Luther criticised the power and practices of the Catholic Church.

On 31st October 1517, Martin Luther sent a letter to Archbishop Albert of Mainz requesting that the sale of indulgences stop. He included a copy of his work ‘Disputation of Martin Luther on the Power and Efficacy of Indulgences’ also known as the ’95 Theses’. It includes a list of Catholic practices that Luther felt were wrong. Most of these relate to making some form of payment to the church to have your sins forgiven.

The story is traditionally told that Martin Luther nailed his 95 theses to the door of the castle church in Wittenberg but this is now disputed and thought to be symbolic rather than an actual act. Nevertheless, this event marks the beginning of the Reformation. Those that followed Luther became known as Protestants meaning those that protest against the Church.

It was wrong that people could ‘buy off’ their sins by paying money to the church; he believed that only God could pardon sins.

Instead of making payments to the church, people should seek salvation by believing in God, making pilgrimages to Holy places and by doing good works.

Priests were not divine beings. They should not be exempt from prosecution if they committed a crime, rather they should be subject to the law of the land in the same way as ordinary men and women.

Luther believed that Priests could not turn bread and wine into the body and blood of Christ during Communion.

The Bible was written in Latin and interpreted by Priests. Luther believed the Bible should be translated and all people should be allowed to read the Holy Book.

Luther believed Churches should be plainly decorated and should not display rich images of Saints and crucifixes. He also felt that priests should not wear elaborate clothing.

Many people agreed with Martin Luther and joined his protest against the Catholic Church. They became known as Protestants.

Henry VIII had been raised as a Catholic and before the death of his elder brother, Arthur, many felt that he might enter the church. In 1521 he wrote ‘Septum Sacramentorum’. This work defended the Catholic Church against the attacks made by Luther. The Pope gave King Henry the title ‘Fidei Defensor’ (Defender of the Faith).

Henry liked the idea of being Head of the Church in England and of seeing money that used to be sent to Rome being diverted to the Treasury. However, he did not agree with all of Martin Luther’s views on the Church and did not want to make England a Protestant Lutheran country. Instead, Anglicanism would be stand midway between the Roman Catholic and Lutheran Protestantism of the sixteenth century.

How did Henry VIII Break with Rome?

It took four years, from 1532 to 1536, to break with Rome and complete the English Reformation.

15th May – Submission of the Clergy – All Bishops had to sign a document saying that they would not make new church laws without the King’s permission.

Summer – Act in Restraint of Annates – This act stopped English Churches from sending money to Rome.

early September – Thomas Cranmer, who believed that the King should be head of the Church, was appointed as Archbishop of Canterbury.

25th January – Henry VIII declared his marriage to Catherine to have been invalid and married Anne Boleyn.

7th April – The Act in Restraint of Appeals – This act made it illegal for any foreigner to interfere in English law or to have more authority in England than the king.

Spring – The Act in Absolute Restraint of Appeals – This act transferred all church monies that would be normally sent to Rome to the King.

24th March – The Act of Succession – This act removed Mary, Henry’s daughter with Catherine, from the line of succession and granted succession to the children of his relationship with Anne Boleyn. Everyone in the land had to swear an oath recognising the terms of the Act. Anyone refusing to take the oath would be guilty of treason.

3rd November – The Act of Supremacy – This Act declared England a sovereign state with the King as Head of both the country and the Church. It gave Henry the power to reform the church as he saw fit and also to appoint churchmen of his own choosing.

November – The Treasons Act – This Act made it a treasonable offence, punishable by death, to deny any of the King’s titles.

17th June – John Fisher was executed – The Bishop of Rochester had refused to swear the Oath of Succession.

6th July – Thomas More was executed – the former Chancellor of England had refused to swear the Oath of Succession.

Summer – The executions of John Fisher and Thomas More sent a powerful message that there would be no exceptions to the new rules.

See of Rome Act –  This Act removed the last traces of the Pope’s power in England and completed the English Reformation. The passing of this Act, together with the Act in Restraint of Appeals (1533) and the Act of Supremacy (1534) made it unacceptable for monastic communities, who owed allegiance to Rome, to remain.

11th March – Monasteries in England began to be closed. Their gold and riches were passed to the Crown.