On 22nd June 1509, King Henry VIII and Catherine of Aragon travelled by royal barge from Greenwich to the Tower of London. It was an age old custom that the monarch should spend the nights before the coronation at the Tower. Knights of the Bath

In the evening, Henry and Catherine were served dinner by 26 men of the realm. These men were to be made Knights of the Bath the following day. Serving the King and Queen was a symbolic act to represent their rise and that they would never have to serve at table again.

On the morning of 24th June 1509, a procession formed within the Tower of London. Henry was on horseback while Catherine was seated in a litter covered in cloth of gold. Behind the King and Queen were officers of state, members of the royal household, the Lord Mayor of London, the aldermen and livery companies. Henry’s horse was richly decorated and he was surrounded by an armed guard.

The procession made its way through Cheapside, Temple Bar and the Strand to the Palace of Westminster. The streets were decorated with rich tapestries and cloth of gold. People had placed flowers and oil lamps on their doors and crowds cheered as the procession passed by.

A scarlet runner had been placed between the Palace of Westminster and Westminster Abbey. Henry dismounted and walked along the runner while Catherine remained in the litter until she reached the Abbey.

Henry was richly dressed in a coat of gold embroidered with precious stones. Over that he wore a crimson velvet robe trimmed with ermine. Catherine wore an embroidered gown of white satin. Her long hair was left loose and topped with a coronet of rich stones.

Inside the Abbey, the royal couple processed past the nobles, dignitaries and prelates of the land who had been invited to witness the ceremony. King Henry sat in King Edward I’s coronation chair. He then received the crown of Edward the Confessor from William Warham, Archbishop of Canterbury. Catherine was crowned after Henry with the smaller crown used for queen consorts. 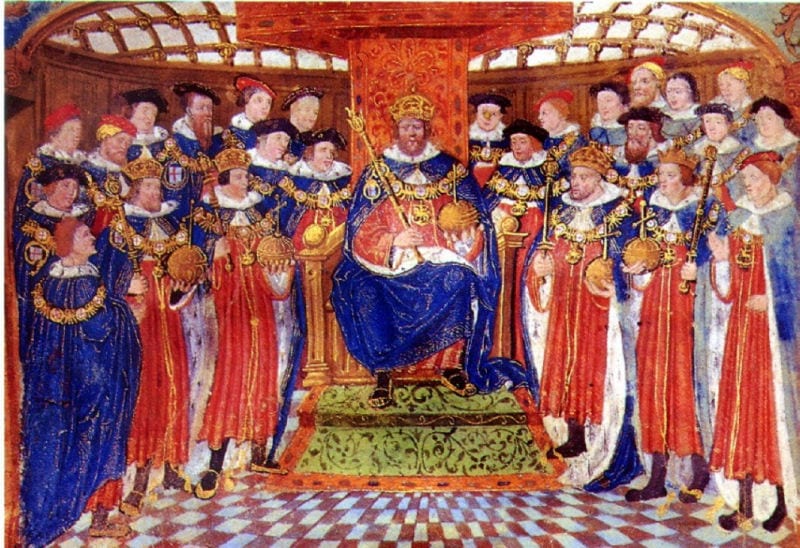 After the ceremony a coronation banquet was held in Westminster Hall.

In the streets, bonfires were lit and trestle tables laden with food and drink were set out for people to eat drink and be merry. There was much singing and dancing in the streets of London.

Several days of celebration followed with tournaments, pageants and banquets. Although he was very skilled at jousting, Henry took no part in the lists, preferring to watch from the royal pavilion.